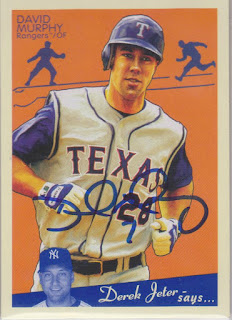 For whatever reason, I thought that I had already posted a card of David Murphy on here at some point. It turns out that is not the case. So, I had to rewind a bit to get this one in.

I got his card signed by him outside of Kauffman Stadium in 2012. He arrived at the ballpark that day on the team bus. If you have never 'graphed players getting off of a Major League bus, it can be difficult. For starters, the players are all in their street clothes and are a challenge to identify. The bigger name guys are easier to spot, but everyone wants their autograph and I rarely try for them because of that. If someone is lucky enough to get them to come over, I will just hop into that mob. Usually, I try to identify one or two players or coaches and just bet on them. It worked out that September day in 2012 in Kansas City as I was somehow able to recognize David Murphy. He was the only guy from the bus that would come over and sign for me.

David played in the Majors for parts of ten seasons with the Red Sox, Rangers, Indians, and Angels. He spent the bulk of that time in Texas and was very consistent during his seven seasons playing outfield there. With the Rangers, he hit .275 and averaged 14 home runs and 58 RBI a season for them as a regular.