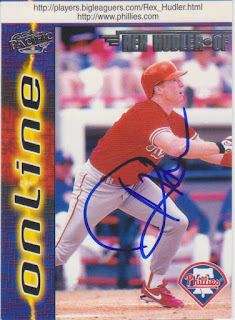 I believe that this is tenth card of Rex Hudler that I have posted on here. Rex took over the Royals color commentator role in 2012 and I seem to get him to sign at least once a year. But, I am slowing running out of cards of him. And, at this point, he is not a priority anymore. I got the cards signed by him that I wanted signed. But, I still take cards of him to games just in case he might be the only autograph I get.

This card was first Phillies card that I got signed by Rex. I got it signed at a Royals game two years ago. I thought it would be the only Phils card of him that I would own, but I picked one up from a former co-worker last year and got that one signed at Spring Training this year. I posted that card last month and it can be seen here.

Rex spent his last two seasons in the Majors with the Phillies. He saw limited playing time and had less than spectacular results. He got 175 at-bats with the Phils and he hit .196 with 5 home runs and 12 RBI.

On the Royals broadcast last night, Rex was telling a story about how he once ate a June Bug at a game on a dare. Plus, he made $800 by doing so. It tasted like bacon he said.
at 11:21 PM