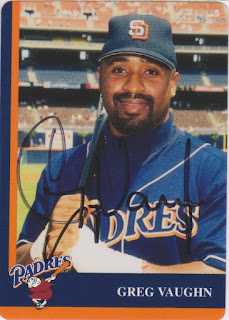 Here is a cool card that was given to me by Rod, from Padrographs, when we met up at a Hillsboro Hops game in 2015. You never know what you are going to get when Rod gives you a care package. You know there are going to be signed Padre cards, but who or what kind are always a mystery. It is mostly standard issue stuff, but every once on a while you get a gem like this.

This is a Mother's Cookie card that was a Stadium Giveaway in 1998. From what I can tell, Mother's Cookie made at least five teams sets in 1998. All of the sets were for California based teams except for one, the Astros. Naturally, I did not go to any Padres games in '98, so it is really cool to get a signed one to add to my collection. Rod actually gave me two signed cards from this set, but this is my favorite of the two.

Greg was a monster hitter that played for 15 years with the Brewers, Padres, Reds, Devil Rays, and Rockies. Over that time, he hit .242 while mashing 355 homers and driving in 1072 RBI. He made two All Star teams, going 2-2 with a run and 2 RBI in his Mid-Summer Classic appearances. He played in the postseason twice, both with the Padres, and helped the team to the 1998 National League pennant.

went to one Padres game in 1998 (it's a trip from Portland) and Greg Vaughn was the only auto I got.