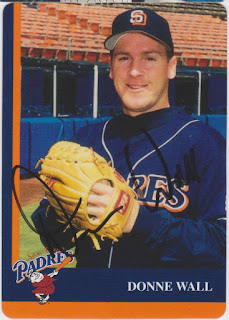 Donne pitched in the Majors for eight seasons with the Astros, Padres, Mets, and Angels. After beginning his career as a starter for the 'Stros, he pitched out of the bullpen for the last five years of his career. Over that time, he racked up a 31-28 record with 2 saves and a 4.20 ERA.

Donne's best season was probably during the Padres pennant winning 1998 campaign. That year, he was 5-4 with a save in 46 outings and had a career-best 2.43 ERA. He pitched in all three of the Padres postseason series that fall and he was 0-1 with a save and a 5.40 ERA in 6.2 innings of work. That was Donne's only postseason action during his Major League career.
at 10:18 PM