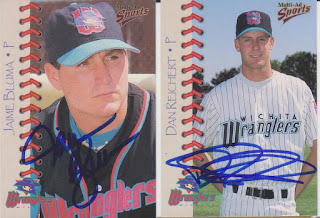 A few years back, I came across this Wranglers team set at the oldest card shop in Kansas, Rock's Dugout. It was only a dollar, so I could not pass it up. There are no big names in it, but I am always needing cards of Jamie Bluma.

I got Bluma to sign his card at Royals Fanfest in 2016. Even though Jamie only pitched 20 innings with the Royals, he is always at Fanfest and showing up for alumni events. That is why I am always on the lookout for cards of him.

I got Dan to sign this card at a Lincoln Saltdogs game last summer. We stayed in Lincon when we went to the College World Series last year and decided to take in a Saltdog game the night before the Series started. We only stayed three or four innings before a massive storm rolled in, but I was able to get this card signed before the game started.

I finally attended my first Major League game of the year this weekend. I went and saw the Yankees whoop up on the Royals. I took cards to get signed, but came home empty-handed. It has been a while since that has happened. Turns out the Yankees aren't great signers. Who would have thought? Aaron Judge signed for a bit, but he was on the opposite side of the dugout that I was on. Clint Frazier signed for some people that had on-field passes. And Neil Walker signed two autographs for some kids in the $500 seats. That was the only signing I saw. I even called for Reggie Willits and Marcus Thames to come and sign. Reggie just waved at me and Marcus told me he had to get to a meeting. Oh well, it was worth a shot.
at 10:27 AM