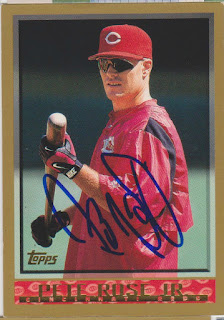 Here is the third and final card that I got Pete Junior to sign for me at a Wingnuts game in 2016. Pete was the manager of the Wingnuts at the time and he signed all three cards for me before an early season game. You can see the first card he signed for me here and the second one here.

After spending nearly a decade playing in the minor leagues, Pete Junior got a cup of coffee with the Reds in 1997. He was a September call-up and he made his first start on September 1st against the Royals. He batted seventh and played third base. He finished the day 1-3 with a single and two strikeouts. He got one more hit two games later and was 2-5. He then went hitless the rest of the season and finished 2-14 with two runs and two walks. That was the only time he would play in the Majors.

Pete managed the Wingnuts for two seasons and he lead the team to two division championships and a 122-77 record. But, for whatever reason, the Nuts wanted to go a different direction this year and Pete's contract was not renewed.

While there are a lot of cards of Pete Junior, this is the only one from his time in the Majors.
at 12:21 PM