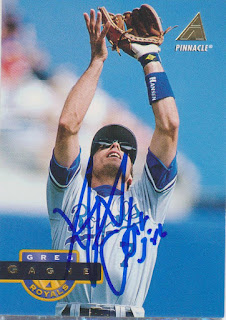 Here is a card that I got signed through the mail this past November. Greg seemed like a good TTM signer, so I sent this card to him just to have an autograph from him on a Royals card. It took him just eight days to get this one back to me.

Even though Greg spent three seasons in Kansas City, I still always think of him as a Twin. I guess that is because he spent his first ten seasons as a big leaguer in Minnesota. Over that time, he helped the club to two World Series titles as the starting shortstop in all fourteen Fall Classic games.

Even though Greg built his reputation with the Twins, he was a very solid player when he came to Kansas City in 1993. In fact, he probably had his best season ever that summer. He set career-highs in average (.280), doubles (32), and RBI (57) en route to being named the Royals Player of the Year.