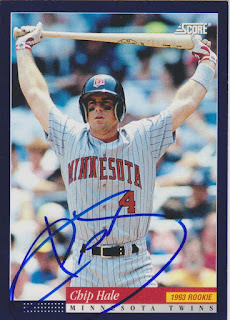 If you have been wondering where I have been the last couple of weeks, I was prepping for my Spring Training trip last week. We left for Arizona last Monday and got back Saturday morning. We ended up going to three Spring Training games, two minor league camps, and one college game. I did okay on the 'graphing front, bringing home seventy-five signed cards and a signed batting glove. My goal was 100 cards, so I came up a bit short. I had planned on hitting the White Sox minor league camp hard, but it wasn't open the day we where there. So, we ended up in Maryvale for the Brewers and I was not as prepared for them as I was for the Sox. But, overall, it was a good trip.

Speaking of Spring Training, here is a card that I got signed at Spring Training last year. Chip was the third base coach for the A's at the time and he signed three cards for me before a game. I posted the first one three months ago and it can be seen here.

As for the A's, I really like 'graphing that club at Spring Training. I have hit them up three times over the years and I always do really well, especially with the coaches. It was the same this year as I got twenty-one cards signed by them at the Angels game I attended. On top of that, I got one of Marcus Semien's batting gloves and he signed that for me as well.