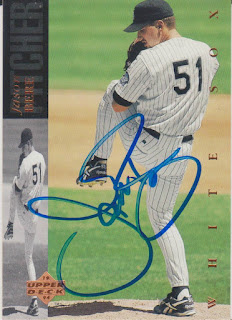 Here is the third and final card that Jason Bere signed for me at Kauffman Stadium in 2016. Jason was the bullpen coach for the Indians at the time. You can see the first card I posted of him here and the second one here. Out of the three, this one is my favorite because Jason isn't wearing a black jersey in the photo and the signature is more visible because of that.

Even though Jason got released by the White Sox midway through the 1998 season, he would still go on to pitch for another six seasons. He bounced around a bit, seeing time with the Reds, Indians, Brewers, and Cubs. He never was able to regain the magic he had with the Sox during his first two seasons in the Majors, but he did have one more good season.

That was with the Cubs in 2001. His arm must have been feeling good that season as he started more games and threw more innings than any other season he ever pitched. He posted an 11-11 record to tally his third double-digit win season and his 4.31 ERA was the lowest he had had since his second season in the Majors. On top of that, he struck out a career-high 175 batters.