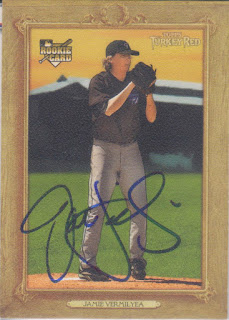 Here is the third and final card of Jamie Vermilyea that I got signed at a Wingnuts game last season. Jamie was the pitching coach for the Winnipeg Goldeyes and he signed the cards for me prior to the start of the game. The first card can be seen here and the second here.

I was a little surprised that I was able to round of three cards of Jamie from 2007. He only pitched in two games in 2006, and for his career for that matter. Yet, Topps put out of card of him in this set, Topps base, and Topps '52, all of which I got signed. They even made a card of him in their Bowman set. But other players that made their debut in 2006 were just relegated to the '52 rookie set. I wonder why they gave a few extra for Jamie and his six innings of work.

The 2007 Turkey Red set is a little different for Turkey Red, but I like it. For starters, the pictures are a little brighter than the first few sets. They look a little better that way and they turn out better when signed. The big difference, though, is the gold border. All of the previous Turkey Red sets had grey borders and they were a little tough to differentiate between the different years. Add in the super-small print of the copyright on the back and the task became even more difficult. Luckily, with this set, that was not an issue.

It appears that Jamie will not be with the Goldeyes this upcoming season. Right now, their manager, Rick Forney, is listed as the manager/pitching coach.
at 10:10 AM