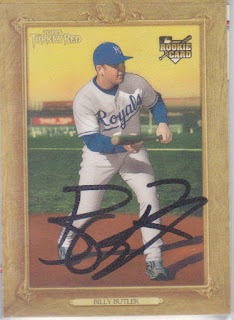 Here is the third card of Billy Butler that I have posted on here. I got this one signed by the Royals parking lot in 2008. I am not sure who sent me this card, but I do know that it was from a fellow blogger.

This card cracks me up just because it shows Billy bunting on it. I have only seen Billy attempt to bunt in a game one time and it was not pretty. It was early in his Major League career and you could tell bunting was not something he worked on in the minors. If I remember correctly, he stabbed at the first two pitches, without any luck, before having to swing away. For his career, Billy has zero sacrifice bunts. But, he does have five stolen bases.

For those of you that are not Royals or A's fans, here is a fun fact for you. Billy's nickname is Country Breakfast. True story.

I just realized that this set does not list positions on them. I guess I will get to pick his position for the label and it is not going to be outfield like it was on the last card of Billy.
at 9:00 AM