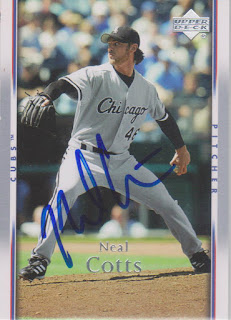 Here is the third card of Neal Cotts that I have posted on here. The first one, a card I got signed at an Iowa Cubs game in 2009, was posted about six years ago and it can be seen here. This card was signed at that same I-Cubs game. I then posted another card last year that I got signed at a Royals game. That one can be seen here. It looks like I have two more cards of Neal to post, one from each encounter. Those are cards from 2009, so they will probably get posted sometime around 2020.

Last season, Neal split the year between the Brewers and Twins. He started the season in Milwaukee and went 1-0 with a 3.26 ERA over 49.2 innings while striking out 49. He was then traded to the Twins in August to help their fizzling playoff chances. He had no record with the Twins and posted an ERA of 3.95 with 9 strikeouts in 13.2 innings.

If you notice on the left side of this card, Neal is listed as a Cub. That was one of the things I liked about Upper Deck. They did not feel the need to airbrush players into their current uniform. As you all know, Topps tends to overdue the airbrushing.

Neal is currently in camp with the Astros as a non-roster invitee.
at 11:51 AM