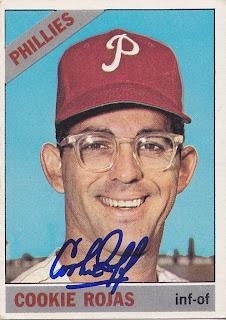 This is another card that I got signed at the All Star Game Fanfest this past summer. Since the game was in Kansas City, many of the former players that signed autographs had some sort of tie to KC. Cookie spent the last part of his career with the Royals and had his best seasons with them. But, since my collection includes so many Royals autographs as it is, I had to make sure to get a non-Royals card signed by him. So, I picked up this card for less than a buck and I made it happen.

Cookie made his Major League debut with the Reds in 1962 at the age of 23. His time with Cincy was short-lived, however, as he was traded to the Phils after that season. He played in Philadelphia for seven seasons and made his first All Star team as a Phillie in 1965. That season, Cookie hit over .300 for the first time in his career.

Prior to the 1970 season, Cookie was traded to the Cardinals in the great Curt Flood trade. He got off to a miserable start in St. Louis and was hitting .106 through 23 games. The Cards then traded him to Kansas City and a star was born. But, I'll get into that when I post my next Cookie card.

I agree with you, those glasses are truly amazing!

If you like those glasses, check out some more here: