The Rest of 2008 Playoff Contenders 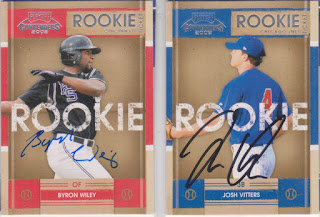 That is it, just two posts from Playoff Contenders. There was just one new guy and two repeats.

I never bought any packs of this product. I just bought a few singles in the hope that I could get them signed. Overall, they are not bad cards to get autographed. The lack of a background helps out by making the auto that much easier to see.

But, one thing that I do not like about these cards is that they say "ROOKIE" in big font right across the front of the card. I think that just looks tacky and takes away from what is only an average looking card at best. Plus, and I know it is a small sample size, none of the three guys I posted were even rookies in 2008. Two are in their college unis and the other is maybe in a Spring Training uniform and sporting a snap back. The earliest any of the guys made the Majors and officially became a rookie was Chase d'Arnaud in 2011.

Byron Wiley- I got this card signed at a Wingnuts game in 2014. I believe Byron was playing for the Laredo Lemurs at the time. I like this card just because he is rocking his Kansas State digs in the photo, though it is not quite as cool as the card I linked to.

Josh Vitters- This card was signed at the same time as the last two cards of him I posted- at the 2009 Futures Game. Those were all the cards I had of him at the time, but I would eventually run into him a couple of years later and add two more signed cards by him to the collection.
at 12:45 AM

Haven't heard or seen Vitters name in years. I pulled a low #'d autograph years ago and was hoping he'd make it big one day.