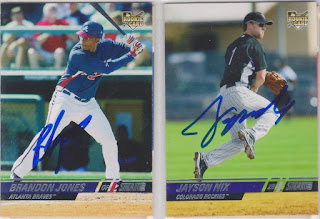 This is it from the resurrected 2008 Stadium Club set. I have just three cards signed- one from a pack and two in-person sigs. Both of the in-person autos were obtained in Wichita's now extinct Lawrence-Dumont Stadium.

Brandon Jones- It has been four years since I posted a card of Brandon Jones. The former Braves prospect played in only five games in 2007, but he somehow got a decent amount of cards in 2008 sets. He played with the Braves for parts of three seasons and he hit .257 with 1 homer and 22 RBI over 51 games. His one home run was off of Ervin Santana. Brandon signed this card for me at a Winguts game in 2014 while he was a member of the Kansas City T-Bones.

Jayson Nix- I posted my first Jayson Nix card just six months ago when I finally got around to posting cards from 2008. In both initial posts of Jones and Nix, I talk about how I once thought I was going to run out of autographs for this blog. Silly me. Anyways, I got this card signed at a Kansas Stars game in 2016 when the team made their NBC World Series debut.

Next up is 2008 Topps. I probably have about sixty cards from the set signed. But, the majority of those cards are going to be repeats, so I should be able to get through the set in about a dozen posts. It might take me a full month to do twelve posts, but we will make it through.
at 11:25 AM