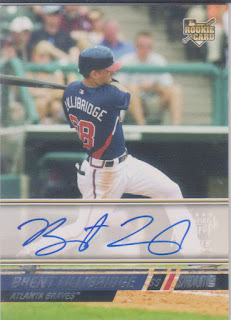 Here is a card that I pulled out of a blaster in late 2009. I guess I was really wanting to open some packs at the time and there wasn't anything new out. So, I found a year old blaster at Walmart for a reduced price and went that route. It worked out well for me as I got this card in it.

Brent spent parts of six seasons in the Majors with six different clubs. He made his debut with the Braves in 2008 before being dealt to the White Sox after the season. He then spent nearly four years in Chicago before they dealt him to the Red Sox in 2012. His tenure in Boston lasted exactly one month before they shipped him to Cleveland. He finished off the season with the Indians before signing with the Cubs for the 2013 season. He lasted in the Cubs organization for for half the season before they sold him to the Yankees. Though he played AAA ball in 2014, he never made it back up to the Major Leagues.

Nearly three years after pulling this card, I would get Brent's autograph in-person. Actually, my oldest boy got it for me and then held the card against his Royals jersey and smeared it. So, this is one of the rare instances where I prefer a certified autograph over an in-person autograph.
at 10:10 AM