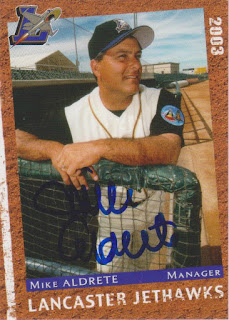 It took me two tries, but I finally got this card signed at Spring Training this year. I took it with me last year and I finally got Mike's attention right before the National Anthem. He was rushed and only signed two cards before tripping over the stairs to hit the field for the anthem. This was the one card he did not sign. But, I caught the A's in action this spring and I got Mike's attention with plenty of time to spare. He ended up signing this card and two more for me this go around.

I bought this team set ten years ago when I went to a Lancaster Jethawks game. They were having a clearance sale in the team store and I picked up three random team sets for cheap. Up to this point, I have only had one card from each set signed. But with this card, I now have two signed from the 2003 set. Lance Cormier is the other card from the set that I got signed.

Mike only managed the Jethawks for one season and the team did well under his leadership. They went 73-67. Despite the winning record, the team finished fourth in the five team California League South Division. They were two games out of second place and a trip to the postseason. That was the last time Mike managed a team.