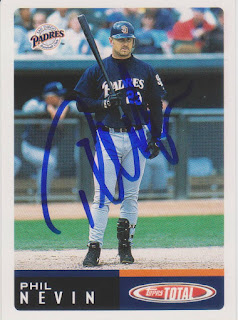 Here is the fifth card of Phil Nevin that I have posted on here. I posted the first one back in 2011 after Rod had sent it to me. Then, I posted three in 2014 and 2015 after I had gotten them signed at Spring Training when Phil was the manager of the D-Backs AAA team. Now, here is this one, another gift from Rod. This one was given to me three years ago when we met up at a Hillsboro Hops game.

If you look at the number on this card, you will see that it has an insert-like number. This card is actually a team checklist. I don't think I ever bought any packs of 2002 Topps Total, but it seems odd that a team checklist card would be considered an insert. It is worth noting that '02 Topps Total was actually a glossy set unlike later sets. But, while the front of this card is glossy, the back of it is not. Also, this card and Phil's base card look exactly the same on the front.

Phil no longer works in the Diamondbacks organization. He is currently the third base coach of the Yankees.
at 10:48 AM

Got Phil TTM a year or two ago; one of my favorite signatures being on his 1994 Classic card. Missed seeing Nevin move organizations.