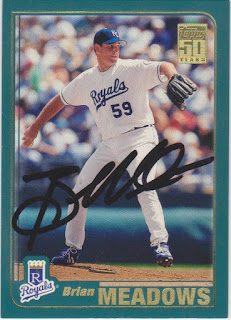 This is a card that I got signed through the mail earlier this year. For a bit, I was sending out TTMs to former Royals that I did not have signed cards from. This is the third one of those out of the last five card posts and my next one will be the same. It was fun adding Meadows, Reboulet, and McCarthy to the collection since they were members of the Royals team I grew to love, the 2000 squad.

Brian only pitched in Kansas City for two seasons and he had just 21 appearances, with all but one being starts. He went 6-2 in his first season there with two complete games and a 4.77 ERA. But, the next year, he dropped to 1-6 with an ERA of 6.97. That was that for Brian with the Royals.

He went on to pitch five more years after that, mainly with the Pirates, where he found a home in their bullpen. Brian finished his career with a 47-62 record with 10 saves and a 5.05 ERA.

Prior to joining the Royals, Brian pitched with the Marlins and Padres. He also played one season, his final one, with the Devil Rays.
at 2:18 PM