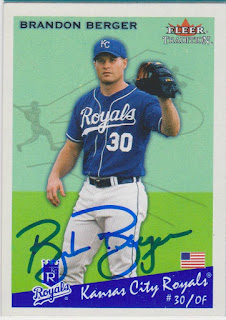 Here is another former Royal that I got signed through the mail this year. I sent this card to Brandon in February and I had it back ten days later.

Brandon was 14th round pick by the Royals in 1996 out of Eastern Kentucky. While he was slowly moving up the organizational ladder, he wasn't even a blip on the radar. That all changed in 2001 when he had a monster year in AA. That season, he batted .308 with 40 home runs and 118 RBI. He got a September call-up from the Royals and continued his hot season, going 5-16 with four extra-base hits, including two dingers.

He made the Royals Opening Day roster in 2001 and it turned out to be a rough season for Brandon. Through July 20th, he hit .227 with 5 home runs and 14 RBI. He was then sent down to AAA for the second time that season and would stay there until the rosters expanded in September. It was a rough September for him and he finished the season with a .207 average with 6 homers and 17 RBI.

After that, Brandon would only play in 24 more Major League games over the 2003-2004 seasons. He never hit another home run and he finished his career a .212 hitter with 8 home runs and 24 RBI.