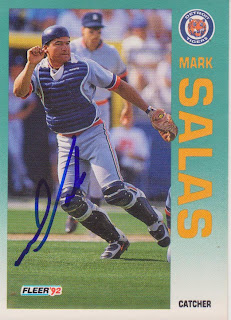 Here is a new Mark Salas autograph that I got at my first Royals game of the season. The White Sox were in town, and Mark is still their bullpen catcher, so I was able to get him to sign three from the visiting team bullpen.

By the way, I said that Mark is "still" their bullpen catcher and did not mean that in a bad way. I meant that Mark is fifty-three years old and he is still able to squat down and catch bullpen sessions. That is pretty amazing to me.

Mark played in the Majors for eight seasons with six teams- Cardinals, Twins, Yankees, White Sox, Indians, and Tigers. He was mostly used as a backup catcher, except for his first season in Minnesota. For his career, Mark hit .247 with 38 home runs and 143 RBI. As a Tiger in 1990, he hit a career-high 9 home runs.