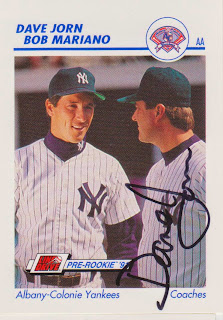 Here is a card that I unexpectedly got signed in Manhattan, Kansas last year. Dave is the pitching coach for Arkansas and they made the trip north to play in the Regional hosted by Kansas State. Since it was the first Regional ever hosted by K-State, I bought session passes and then reworked my work schedule to make most of the games. Before leaving town, I checked the coaching staffs to the non-Kansas schools and found that Dave had a card that I actually had in my collection. How about that? I was able to get the card signed on the first day of action before the Razorbacks were upset by Bryant.

Dave pitched in the minors for White Sox and Cardinals for six seasons. He was mainly used as a starter and made it all the way to AAA. He didn't do too well at that level in his nine starts and he retired after the 1981 season. He started coaching at Arkansas in 1983 and was their pitching coach for six seasons. He left the college game to join the Yankees minor league coaching staff in 1989. He stayed a minor league coach/manager through 2001 and then rejoined the Arkansas staff in 2003 and has been there ever since.

Some of the Arkansas pitchers to work under Dave include Dallas Keuchel, Drew Smyly, and Duke Welker.

I have no idea who Bob Mariano is and I have not yet taken the time to look him up. But if anyone has any clues, please let me know as I would love to get this card completed.

This is the third straight Yankees card that I have posted. That may never happen again.

Update: Bob apparently is the manager for the Fresno Grizzlies. I have sent out one TTM request to a AAA manager this year and have not received it back yet. What should I do? Do I send it out and try to get it completed or just keep it as it is? I'm leaning with testing my luck.
at 10:16 PM