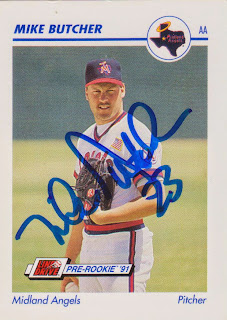 Here is a card that I got signed at a Royals game last summer. Mike is the pitching coach for the Angels and he was nice enough to sign a couple of cards for me before the game.

Mike seems to have a friend that lives around Kansas City because I was able to get the cards signed as they were talking it up by the fence. I mention that because he did it again this past Sunday. It looked like Mike was getting interviewed on the Angels pregame show and then he went into the camera bay area and talked up his friend for a good twenty minutes. I would have got some more cards signed then, but I got them all signed last year. I apparently need more Mike Butcher cards as he is an easy autograph in Kansas City.

Looking at Mike's minor league stats, I am surprised that he ever made it past AA. He spent three seasons in the Texas League and he posted ERA's of 6.55, 6.21, and 5.22. I guess getting his ERA under six earned him a promotion to AAA. He responded there with a 3.07 ERA and stint with the big league club. Shows how much I know.
at 4:57 PM