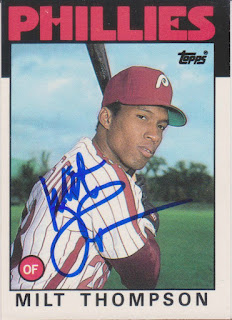 It has been a nice run with the '86 Topps set, but this is the final one this time around. I already got a new '86T that is ready to go whenever I make it back to this set.

Here is the second card of Milt Thompson that I got signed at Spring Training this year. The first one was his '86 Fleer card and it can be seen here. I originally wanted both of his '86 Topps cards signed, but the base card that I had was not in the best of shape. So, I settled with the Fleer just to have a card of him as a Brave.

Milt was traded to the Philliies after the '85 season. The Phils sent over Pete Smith and Ozzie Virgil and got got back Milt and 1987 Cy Young Award winner, Steve Bedrosian. I think the Phillies got the better deal in that trade.

Milt stayed in Philly for just three seasons before heading to St. Louis, only to end up back in Philly four years later. Thanks to the two stints with the team, that was the club that he played for the most. Over his years as a Phillie, Milt hit .279 with 22 home runs and 173 RBI. His best season was with them, too, when he had career-highs in hits (159), home runs (7), and stolen bases (46) during the 1987 season.

Milt's lone postseason exposure was with the Phils in 1993. In the Fall Classic, Milt had a very respectable series, hitting .294 with a home run and 6 RBI in the six games.
at 3:43 PM