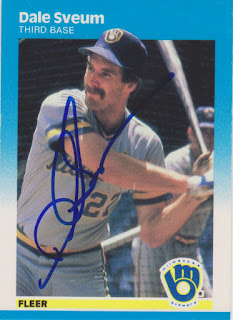 Dale Sveum has been the Royals hitting coach since 2014 and this is the only autograph that I have gotten from him. I was lucky enough to catch him outside The K before a game late last season and he was nice enough to sign one of three for me.

Dale played in the Majors for twelve seasons with the Brewers, Phillies, White Sox, A's, Mariners, Pirates, and Yankees. Over that time, he was a .236 hitter with 69 home runs and 340 RBI. He had one monster season with the Brew Crew in 1987. That year, he hit a robust .252 with 25 dingers and 95 RBI. It was only one of two seasons that he hit double digit home runs and the only one where he hit more than 15.

Dale spent his first five seasons in Milwaukee and then bounced around a ton after that. Even though he played with seven different teams, good luck finding a card of him not with the Brewers. From what I have seen, he only has a couple of Phillies and A's cards, one Yankee card, and not a single card of him with the White Sox, Mariners, or Pirates. The lack of a Pirates card surprises me since he got 306 at-bats with them in 1997. That was the most he had in a single season since 1988.

I find it funny that Dale has 59 more strikeouts than hits as a Major Leaguer. That is funny to me because he is the hitting coach for a team that won a World Series two years ago by not striking out. How does that work?