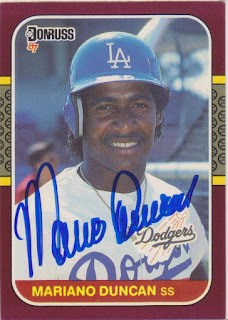 Here is the second card of Mariano Duncan to be posted on here. The first one was posted in 2014 and it can be seen here. The two cards were signed at the same time, during a Cubs minor league Spring Training workout in 2014. Mariano was the hitting coach for the Daytona Cubs at the time. The Daytona Cubs are no more and Mariano has moved up to AAA to fill the same role for the Iowa Cubs.

Mariano played for the Dodgers for parts of four seasons before being dealt to the Reds for Lenny Harris and Kal Daniels. Over that time, he hit just .234 with 20 home runs and 95 RBI. More impressively, he stole 100 bases for the Dodgers, including a career high of 48 in 1986. The most bases he would steal in a season with any other organization was 23 with the Phillies in 1992.

Mariano did not do as well as Franklin Stubbs did on Opening Day in 1987. While Franklin went 3-4, Mariano went hitless in four at-bats while striking out three times.
at 10:59 AM