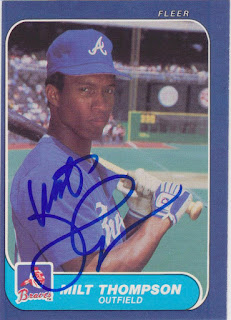 Here is the first of three cards that I got signed by Milt Thompson at Spring Training this year. Milt is currently the hitting coordinator for the Reds and he was nice enough to sign the cards for me while walking from field to field at the Reds minor league complex.

When I first asked him to sign, he told me he couldn't then because he was working. Then he looked around and, since I was all by myself, he told me to go ahead and come over. He even took the time to chitchat while he was signing. I knew he had worked for the Royals the year before because I saw him at a Storm Chasers game. I asked him how he was liking it with the Reds and he told me he loved it because he got to concentrate on the one thing he loved, hitting. I wish I could say that about my job right now.

Milt was a second round draft pick by the Braves and played for them for two seasons. Over that time, he hit .302 with 2 home runs and 10 RBI. He was traded to the Phillies after the 1985 season.

You just do not see cards miscut like this anymore. Every once in a while, you will see some gold foil misprinted, but that is about it.
at 10:52 PM