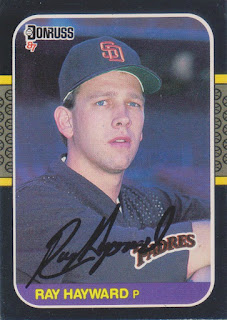 Here is the first of three cards that I got signed by Ray Hayward at the College World Series in 2014. Ray is the pitching coach for Texas Tech and was nice enough, and a little surprised, to sign for me before the Red Raiders opening game of the series.

Two of those three starts were really bad. But, he did have one quality start in there against the Dodgers where he pitched six innings, allowing two earned runs on four hits and a walk while striking out six. The Padres were down 3-1 when he came out, but he got the no-decision when they rallied for a 7-6 victory.