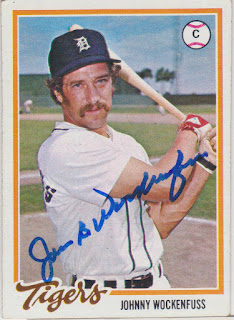 Back in 2013, I sent an '81 Donruss card to John to add him to that set. I got that card back twelve days later with two extra cards that he sent me. This is one of the extra cards. The other that he included was his '85 Donruss card that I posted three years ago.

While the two extra cards were cool, the best part was that he wrote me a note back. In that note, he talked about how he loved to bow hunt for deer and that he has heard about the deer in Kansas. In short, he wanted to know if I had any places here to deer hunt and he gave me his phone number to call him if I did. I have posted this story twice before and I still get a little giddy thinking about it because it such a cool and unique TTM response.

I have a cousin-in-law out in western Kansas that is a big hunter. Maybe I should hook these two up next fall and go hang out with John Wockenfuss for a week.
at 8:51 AM

If you need your ex-girlfriend or ex-boyfriend to come crawling back to you on their knees (no matter why you broke up) you got to watch this video
right away...

(VIDEO) Have your ex CRAWLING back to you...?