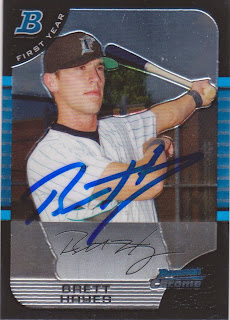 Here is the second card that I got signed by Brett Hayes at Royals Fanfest last year. I posted the first one a couple of weeks ago and it can be seen here.

Brett was drafted by the Marlins in the second round of the 2005 draft out of Nevada. By 2007, he was in AA and he got his first taste of Major League action in 2009. In limited action that season, Brett hit .273 with a home run and 2 RBI in 14 games. He split 2010 between AAA and the Majors and finished with a .208 mark with the Fish. In 2011, he was on the Major League roster the entire year as John Buck's backup. He got into 64 games that season with about half of those being starts. To date, it is the only season where he did not play in the minors and he hit .231 with 5 home runs and 16 RBI. 2012 was his final season as a Marlin and he hit .202 in 39 games. After the season, he was picked up off of waivers by the Royals.

As a Royal in 2013, Brett was the third string catcher. Because of that, he spent most of the season in AAA. He had a monster year there and hit a career-high 17 home runs. He only got into 5 games at the Major League level, but he went 5-18 with four of his five hits being for extra bases. Because of his strong finish, and the departure of George Kottaras, Brett went into the 2014 season firmly implanted as Salvador Perez's back-up. Because of that, he was at Fanfest and I was able to get some cards signed by him.
at 4:07 PM