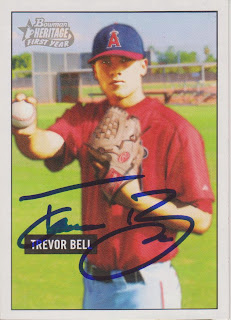 Here is a card that I picked up a little over three years ago in a trade with The Angels, In Order. Tom is working on a signed set of 2006 Fleer Tradition and he swapped me this card for a Tim Hamulak card from the set.

Trevor pitched for the Angels for parts of three seasons, from 2009-2011. He started a few games with them, but mostly pitched out of the bullpen. During that time, he was 4-8 with a 5.21 ERA. He posted a career-best ERA of 3.41 over 19 outings in his final season with the club. But, it wasn't enough and they let him walk after that season.

He was picked up by Detroit for 2012, but he was cut during Spring Training. The Reds grabbed him after that and he has been pitching in their system since. He did resurface on the Majors last summer with them. He made just two appearances and they did not go too well. He pitched just .2 innings and gave up 5 runs on 5 hits and a pair of walks.

It would appear that Trevor is currently a free agent.
at 10:08 AM