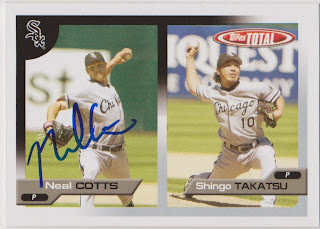 Here is the first of two cards that Neal Cotts signed for me outside of Kauffman Stadium at the end of the 2013 season. Neal was with the Rangers at the time and he signed them after hopping out of a cab before a Sunday day game.

This is not the first card of Neal Cotts that I have posted on here. I posted the first one in 2010 and that card can be seen here. Neal signed that card for me in 2009 while he was playing for the Iowa Cubs. When I posted that card, Neal was a member of the Pirates AAA team, but he was injured. In fact, he was messed up so bad that he missed the entire 2010 and 2011 seasons. But, he was back in 2012 and worked his way back to the Major Leagues in 2013.

He had a really good season that year. In 58 games, Neal pitched 57 innings and went 8-3 while posting a superb 1.11 ERA while striking out 65 batters. He regressed a bit last year and his ERA jumped up to 4.32 and he struck out less than a batter per inning.

The Rangers let Neal walk after the season and he is now in Spring Training with the Brewers.

I do not foresee this card ever getting signed by Shingo Takatsu.
at 6:01 PM