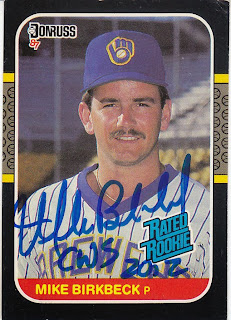 Here is the first of many late '80s signed cards from Brewers pitchers. I didn't plan it that way. It just sort of happened.

I was able to get this card and two others signed by Mike Birkbeck at the 2012 College World Series. Mike is the pitching coach at Kent State and I got the cards signed before the Golden Flashes very first College World Series game. While I always come home from Omaha with autographs from Fanfest, getting Mike was the only time that I have ever 'graphed at an actual game in Omaha.

I thought that it was pretty cool that he inscribed "CWS 2012" on all three cards. It was kind of an afterthought for him as he signed all three cards with just his signature. He then went back and added the inscription to each one.

I started collecting cards in 1985 and all I saw my first two years was Topps and 1986 Sportsflics. This Donruss set was the first set I had seen besides those two and I loved this set. 1987 was a fun year to collect as Topps brought back the Future Stars and Rookie Cup subsets. But, I love this set more because of the Rated Rookies and Diamond Kings. I finally added a signed Rated Rookie card from the set to my collection.
at 6:42 PM

I like the CWS 2012 inscription - it makes your card stand out.