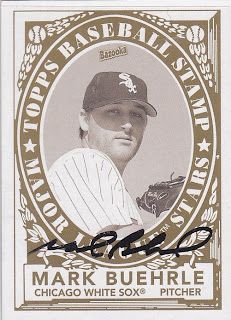 Here is a card that I got signed through the mail in 2009. I sent this card to Mark at the White Sox Spring Training compound in February and I had it back in the first week of March. I don't send out too many cards to Spring Training anymore, but it obviously pays to send them out around the reporting day. That way you can get it to them before the bulk of the mail hits and before they get into the actual games. In other words, it gets to them when they have more free time to answer fan mail.

I was kind of surprised to see that Mark has never been a twenty game winner. He won nineteen in just his second full season in the Majors and has not been able to win more than sixteen since then. In fact, he hasn't even won sixteen since the Sox World Championship season in 2005. Mark has been pretty consistent over the last three seasons, though, as he was won thirteen games in each of them.

Mark is currently a free agent right now and, according to MLB Trade Rumors, there are at least thirteen teams interested in him. It seems like the Nationals have made the biggest push to land him, but anything can happen during the off-season. The Royals are reportedly in the mix, as well, but I would be shocked if that happened. Frankly, it is hard for me to picture Buehrle with anyone but the White Sox. But, that could change.

Even though I have been sending out TTMs since 1988, I really wasn't that good at it until recently. I don't know how many cards I have sent out that were so dark that the signature was almost invisible or were too glossy and the signature bubbled up. But, by 2009, I had finally figured it out. As a result, I sent this beauty to Mark and I could not be any happier with the results.
at 6:10 PM

Those Bazooka Stamp cards were interesting, and they work pretty well for autographs, I see.

I wasn't that impressed with them until I got this one signed.