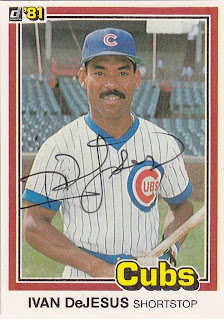 Here is a card that I got signed through the mail by the Cubs third base coach. I sent this card to him on the fourth of May while he was still the Cubs first base coach and I got it back from him on the seventeenth of June. Ivan moved over to third base when Lou Pinella stepped down and Mike Quade (the old third base coach) took over the club.

Ivan's career lasted parts of 15 seasons while he played for seven different clubs- the Dodgers, Cubs, Phillies, Cardinals, Yankees, Giants, and Tigers. For his career, he was a .254 hitter that hit 21 home runs.

I'm sure that most Phillies and Cubs fans remember him as the player that the Phillies got in exchange for Larry Bowa and some guy named Sandberg.

I was unsuccessful for years in trying to get DeJesus. Finally got him well after his career ended. I joked about that when I talked to him before a game at Wrigley (ironically, the game after Piniella's announcement).