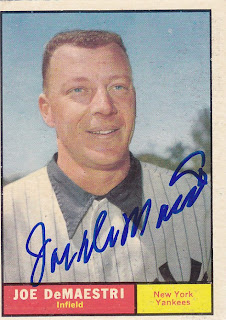 The next week's worth of cards all came from the third annual Kansas City A's reunion at Community America Ballpark in Kansas City, Kansas. The reunion took place on July 17th prior to a Kansas City T-Bones game. There was no formal autograph signing, so I didn't go all out when buying cards for the event. I bought one of each guy that was scheduled to be there (if I could even find one) and hoped for the best.

The day was moving along alright until I got to Lawrence, Kansas on I-70. There was a work zone there and traffic came to a standstill. I was hoping that the construction was holding up traffic, but that was not the case. It turned out that there were two accidents in a five mile stretch of road and it ended up taking me two hours to travel that five miles. So, instead of getting to the park prior to its opening, I got there ten minutes before first pitch. While I was standing in line to buy my ticket, all of the former KC A's were being introduced on the field. I finally made it into the park as the last two A's were being announced and I noticed that they entered the field from the first base side. I figured that they would leave the field the same way they entered, so I went down to the first base line and waited.

As soon as they were done taking pictures, most of them started heading for the third base line to exit the field. A couple left on the first base side, but I didn't have cards of them. By the time I had made it to the third base side of the concourse, most of the A's had already made their way up to their suite. There were a couple of stragglers that I was able to get, but, after that, it was a waiting game. I essentially had to wait for them to come down from the suite and be able to identify them to get their autograph. Needless to say, I didn't catch much of the early innings of the T-Bones game.

Joe DeMaestri was one of the few players I did get an autograph from. He came down with another KC A and of course I didn't recognize either one since I missed the introductions. So I asked the other guy if he was one of the former A's and he said that he was and I asked him his name. I didn't recognize his name since I didn't have a card with me, so I thanked him for coming out and shook his hand.

Right after that, I noticed that Joe was actually wearing his ID Badge and I asked him to sign for me. I don't know what his deal was, but he didn't seem to happy. He signed my card but he did not say a thing or even smile. I don't know if he was just ready to get out of there or if he disapproved of my lame tactic for getting autographs that evening.

As for Joe's playing days, he played for parts of eleven seasons with the White Sox, Browns, A's, and Yankees. He spent a majority of his time with the A's and for his career, he hit .236 while hitting 49 home runs. He even hit 6 home runs in a sesason five times.

Joe made his lone All Star team as an A in 1957. I have no idea what his stats were prior to the All Star game, but he finished the season hitting .245 with 9 home runs and 33 RBI. I guess that even as far back as 1957, the American League was forced to have a Kansas City player on the team. Some things never change.

Joe was packaged in the deal with Roger Maris that sent them to the Yankees from the A's.
at 10:14 PM

He looks happy enough on the card. You got his auto, so that's what counts. Autos show up really nice on those '61s.