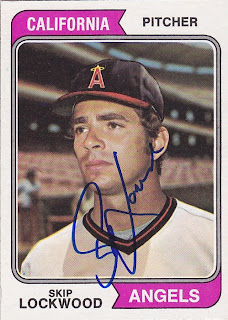 This is the next to last card that I got signed at the Kansas City A's reunion. I was able to get this card signed after Skip came down from the suites to leave. He was with his wife and she had her ID badge on and I could see that her last name was Lockwood. So, I asked the gentleman beside her if he was Skip and it was and when I asked if he would sign, he said yes. So, I started to flip through my book for the cards of Skip. I must have been tearing through the book like a madman because Skip told me to take my time since he wasn't in a hurry. I thought that was really nice since he was obviously leaving the park, but yet he still had time to sign a couple of autographs.

Skip is one of the interesting stories for the Kansas City A's. He made his A's debut in 1965 as a third baseman. He played in 42 games that season and hit .121 (4-33). After that, he went back to the minors and was converted to a pitcher. He pitched in the A's minor league system until he was taken by the Seattle Pilots in the expansion draft. I think it's pretty cool that a guy whose tenure with a team was 42 at-bats (while playing a position he isn't known for today) still comes back for the reunions. I know there are guys who played in Kansas City for much longer than that who do not attend the event.

I now have a whopping two cards signed from the 1974 set and both of them are airbrushed (see the other here). I may have to continue with the trend and only get '74s signed if they are airbrushed.

Tomorrow is going to be Bob Apodaca Day here at Autographed Cards. It should be a unique day and I might even have some quickie contests throughout the day, so check back a couple of times tomorrow.
at 10:32 AM

I thought Skip's hat looked funny. Quite an airbrushing job.

This post made me a little bit sad. It's a great story, and I think it's great that Lockwood is still thought of in Kansas City even though he didn't play there very long.

It's just that he's not recognized in New York, even though he had some of his best seasons for the Mets. They really don't do a good job of remembering the players who weren't part of the 1969 or 1986 World Series teams.

By the way, Skip's wife wrote a book called Major League Bride: An Inside Look at Life Outside the Ballpark. It sounds like it might be an interesting read.

Keep in mind, Paul, that it was the Kansas City T-Bones remembering the KC A's. It wasn't the Royals or Oakland A's doing anything about it.

Aside from the main entrance to the Royals Hall of Fame and a couple of KC A's hats in the gift shop, there is no mention of the A's anywhere else at Kauffman Stadium.

That may be changing though as the Royals wore KC A's blue hats when the A's were in town (they were in town the same weekend as the reunion) ans some of the former players that were supposed to at the T-Bones game were supposedly at the Royals/A's game.