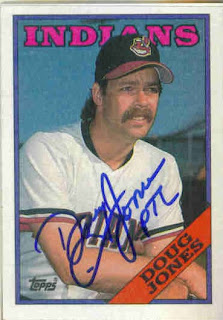 #293 Doug Jones
I won this card in a contest on the 88 Topps Blog. For the contest, we were shown a small picture of part of the card and we had to guess which card it came from. This one was one of the easier ones on there. It showed part of the banner that has his name and part of where his hands are crossing. I just used his labels and searched all of the teams that had red banners and found it.
Other than that, I know nothing else about this card. I don't know how it was obtained or by whom. I don't even know what the PTL under his name stands for. But, I do know that this is the first Indian's card on here.
at 12:53 PM

PTL is "Praise the Lord" I believe, so a spiritual message from Mr. Jones. As for the origins of the card, I got in on eBay a while back. It came with no COA so as far as I know, it could be signed by anybody. It looks very similar to other Jones autos I've seen, though, so I suspect it is legitimate.

Thanks for the help. I've never seen the PTL reference before, just the occasional scripture . So, that's kind of neat. While I haven't seen many Doug Jones' signatures, I'd say that this one matches up with the one on Baseball Almanac.