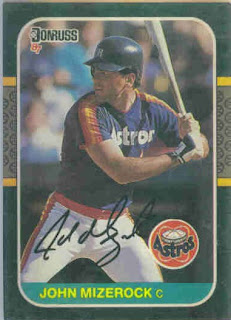 #653 John Mizerock
I got this signed at a Royals game back in June. John is the Royal's bullpen coach. That day, the Navy Leap Frogs were jumping into the park and John was in the bullpen smoking a cigarette and talking with one of the Navy personnel (smokin' and jokin'). After he was done talking, I asked him to sign and he told me that he would in a minute. He checked something in a binder and then came over and signed.
If you've never seen the Leap Frogs before, they are a real treat. I saw them a few years ago at a Braves game and they basically did the same routine in Kansas City. I've seen the Army Golden Knights before, and the Navy team blows them out of the water (and I'm Army biased).
Plus, after they were all on the ground, the C-130 that they jumped out of buzzed the stadium. This wasn't your average flyover. That baby was within a couple of hundred feet of the stadium. I guess that is one advantage of building your stadium in the middle of nowhere. They didn't do that in Atlanta.
at 5:19 PM