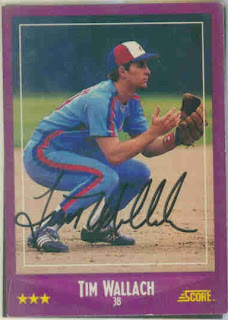 #70 Tim Wallach
I got this signed through the mail when Tim was a Dodger (93-95, probably '94). I'm kind of surprised that I sent a six year old card to get autographed. Most of the cards I sent through the mail were less than a year old. Wallach was a five time All Star for the Expos, but I remember him the most from World Series Baseball on the Sega Genesis. He was a stud on that game.
This is the first, but definitely not last, Expo (or Score) card on here. I love the picture on this card. Tim is down in his stance waiting for anything that the batter might bring his way. Plus, how can you not love the blue unis with the stripes extending all of the way up to the armpits?
Since I got this autograph through the mail (like Steve Sax's), I'm comparing this to Baseball Almanac. And I would say that they are very similar. The only difference is the W. Other than that, they are pretty much the same signature.
at 12:26 AM