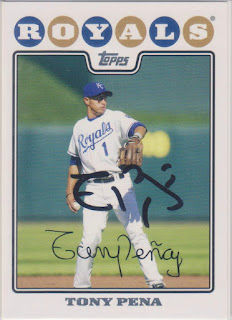 To my surprise, this is the only autograph from Tony Pena, Jr. that I have. Since he played for the Royals for parts of three seasons, I assumed that I got him a few times. But, when I was looking to see if I needed to post this card or not, I discovered this was it.

I got this card signed by him from the Royals parking lot in 2008. The Royals were renovating Kauffman Stadium at the time and had a temporary team parking lot set up. That was my first year getting back into getting cards signed and I tore it up at that location. The players had to walk to a door that was right by the fence. Most of the guys would sign, but not all of them. When I got this card signed, Tony approached the door talking on his cell phone. Personally, it looked like a lot of players would just pull out their phone when they got out of their car and hold it up to their face so that they had a reason to ignore you. After seeing that tactic a few times, I would just ask them anyways. More than likely, they would ignore you. But, you never knew. I got lucky with this card as Tony was using the cell phone trick, but he still came over and signed my one card for me. He didn't mutter a single word while he was signing, either to me or to the phone.

Tony's Major League career lasted parts of four seasons. He came up with the Braves in 2006 and hit .227 in 44 at-bats. He got dealt to the Royals toward the end of Spring Training in 2007 and made the Opening Day roster. Nobody expected much from him that season and he exceeded expectations. While his defense was highly suspect, he hit a respectable .267 with 25 doubles and 7 triples. But the wheels fell off in 2008 and he hit just .169 in 95 games. It got even worse in 2009 and he was hitting .098 in mid-July when the Royals sent him down to Omaha for good.

Kansas City then tried to convert TPJ to a pitcher at the end of the season. He did well as a pitcher, but never made it back to the Major Leagues. He pitched in AAA from 2010-2013 with three different organizations, but couldn't get that call-up. After the 2013 season, he took his craft to Mexico where he would pitch through the 2017 season.