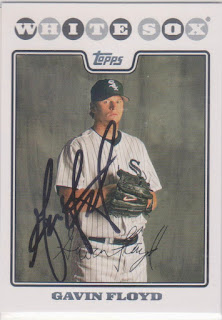 Here is a card that I got signed at a Royals game in 2009 while Gavin was still with the White Sox. That game was a Sunday day game, so the only real chance of getting autographs that day was from pitchers. I had three cards of Gavin to get signed, but this was the only one he did for me. After his successful 2008 season, I was more than happy to just get him on one.

Gavin pitched in the Majors for parts of thirteen seasons with the Phillies, White Sox, Braves, Indians, and Blue Jays. Over that time, he amassed a 74-76 record with a 4.37 ERA. He never made an All Star team and he only pitched in the postseason once. He reached double digit win totals with the White Sox in five straight seasons from 2008-2012. Unfortunately, he only had a winning record during one of those seasons.

Those five years were a great stretch for Gavin. During that time, he had a 4.12 ERA and averaged 151 strikeouts a season. But, then 2013 came and he was only able to make five starts that season before getting shut down and having Tommy John surgery. He would go on to pitch in 44 more Major League games before calling it a career after the 2016 season.