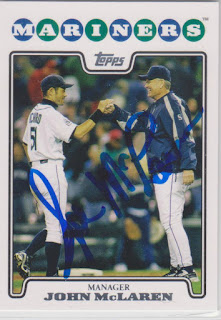 Here is a card that I got signed last year at a Wingnuts game. John was the manager of the visiting Texas AirHogs and I was able to get him to sign for me prior to the game starting.

Last year was John's only season with the AirHogs and it was an interesting one to say the least. Prior to that season, the team partnered with a the Chinese National baseball team and brought about thirty players from that club over to the States to get a taste of American baseball. There were still the normal minor league castoffs on the team and they were always shuffling their roster to get all of the Chinese players some action. Needless to say, but the team did not fare too well and they finished the season 25-75.

At the game I attended, I thought it would be cool if my kid could get some autographs from some of the Chinese players. We had a baseball and got about five of the guys to sign it. Then, Casio Grider, an American, saw my kid and asked for the ball. He then took it into the dugout and made everybody sign it. It turned out really good and even has John right on the sweet spot. It might be just a signed team ball from an American Association team, but, with the mixture of Eastern and Western signatures, it is probably the coolest looking signed ball you will ever see.

can you do a post on the baseball. it would be cool to see.

That's a cool card with the nice Ichiro cameo. I had never seen that card. When I ordered a McLaren card for myself to get signed, I purposefully didn't look at the 2008 Topps card because I just assumed it would have the pre-printed autograph on it. Now I'm discovering that's not the case.

I had never seen it either, Dan, before I had bought it. For whatever reason, manager cards in '07 and '08 Topps do not have the pre-printed signature.