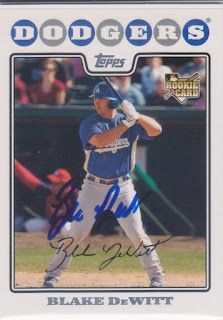 Here is the card of Blake DeWitt that I got signed at an Oklahoma City Redhawks game in 2008. That was before Oklahoma City was the Dodgers top affiliate, so Blake was playing for the visiting Las Vegas 51's. I only have one card signed by Blake, but I do not remember if he was a one-per guy or if this was the only card I had of him at the time. Considering that Blake played in 117 games with the Dodgers that season, I feel fortunate to have caught him at one of the 27 games he played in for Las Vegas.

Blake lasted in the big leagues for just six seasons, seeing time with the Dodgers, Cubs, and Braves. Over that time, he was a .257 hitter with 21 home runs and 135 RBI. His best season was his rookie campaign with the Dodgers in 2008. That year, he batted .264 with 9 homers and 52 RBI.

On an unrelated note, I posted a Felipe Paulino card yesterday. Unbeknownst to me at the time, Felipe had been pitching in the Atlantic League this season and he got signed by the Astros yesterday. So, he may be working his way back to the Major Leagues for the first time since 2014.