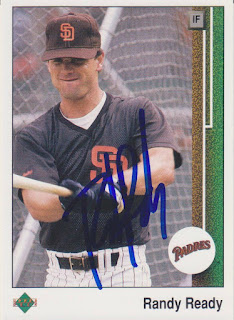 Here is another card of Randy Ready that was given to me by Rod, from Padrographs. Like the last one I posted a month ago, this one was also slabbed by Historic Grading and Authentication. So, according to their services, this is an authentic signature from Randy Ready. Why someone felt the need to pay eight bucks to get this card authenticated is beyond me, but that is how much HG&A charges.

I got Randy to sign three cards for me in 2008 while he was the manager of the Portland Beavers. He held that position for a season and a half before being promoted to the Padres hitting coach during the 2009 season. He had that role through the 2011 season. But, with the Padres finishing the season last in the league for home runs and average, he was let go.

After coaching in the Rangers and Braves organization for a few years, Randy found himself working for the Marlins last season. He started as the manager of their Florida State League team, the Jupiter Hammerheads, before moving to the AA Jacksonville Jumbo Shrimp this past season. The Shrimp made the playoffs this season after winning the second half, but were swept in the first round.