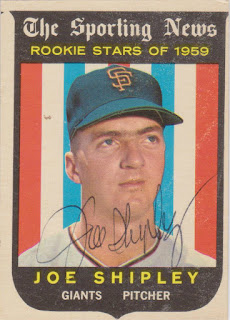 It has been over a week since I have posted an actual card, so here is the next one in the more recent line of '59 Topps I got signed. This one was signed through the mail in 2013 and it took about nine days to get back to me. It is pretty sad that I consider cards that I got signed in 2013 as recent.

Joe had a short Major League career that spanned parts of four seasons, but just twenty-nine games. All of those games came with the Giants except for three outings with the White Sox in 1963. Over that span, Joe had a 0-1 record with a 5.93 ERA with 35 walks to 23 strikeouts.

Sadly, Joe's only decision came in game twenty-seven for him when he pitched one inning and gave up four unearned runs. Instead of walking one and striking out two in the fourth inning in a game against the Red Sox, strike three for the second out ended up as a passed ball and the runner made it to first. After the second strikeout, which should have been the third out, the next four batters each single driving in the four runs. The White Sox went from a 2-1 lead to a 5-2 deficit en route to a 6-2 loss.

On the college baseball front, Oklahoma State lost today and will play against Arizona again tomorrow. If they lose, The Lost Collector wins the CWS Contest. If they win, it is a three-way tie and we will have to wait for the conclusion of the tournament for the winner. Personally, I hope OSU and TCU win tomorrow to set up an all Big 12 final. But, that is just the Midwesterner in me.
at 11:59 PM