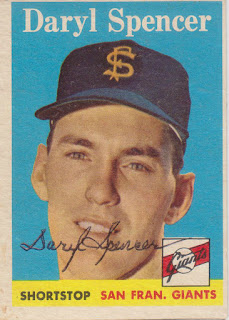 Here is the next '58 Topps card that I got signed through the mail in 2013. This one took me all of five days to get back as I only had to send it down the road to Wichita.

Daryl played in the Majors for ten seasons with the Giants, Cardinals, Dodgers, and Reds. He played second, third, and short, but spent most of his time at shortstop. He had some decent pop for a shortstop in the '50s, hitting double digit home runs in each of his first six seasons. The most he ever hit was 20 and that came during his rookie campaign in 1953. 14 of those 20 came at the Polo Grounds, so I am sure he was taking advantage of the short porch in left field (280 feet). Nonetheless, 20 dingers by a shortstop in 1953 sounds pretty good.

1958 was the first year the Giants were in San Francisco. That is why Daryl is sporting the spiffy-looking airbrushed hat.

Daryl is a Wichita native and will sometimes appear at the local card show there. Unfortunately, he has not been there when I have attended.

On a side note, there is about fourteen hour left to get in the on the College World Series contest. Get those picks in as time is ticking.
at 8:49 PM