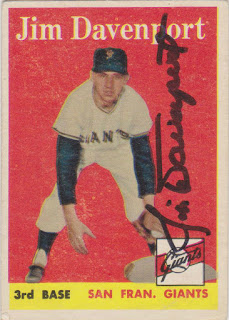 This is the last card from the '58 set that I have to post. After this one, I have about a half dozen cards from the '59 set.

I got this card signed by Jim Davenport through the mail in 2014. It was about a ten day wait to get it back. Unfortunately, Jim passed away earlier this year.

Jim played in the Majors for thirteen seasons and he played every single one of them with the Giants. He was their regular third baseman early in his career before transitioning into their infield utility player. Jim was a .258 hitter for his career and he had 77 home runs and 456 RBI.

Jim's best season was in 1962. That year he had career-highs for average (.297) and home runs (14). To top it off, he made his lone All Star team, won his only Gold Glove, and played in his first, and last, World Series.

As of right now, their are five teams that have punched their ticket to Omaha. They are UC Santa Barbara, Miami, Arizona, Oklahoma State, and Texas Tech. So far, The Lost Collector has picked three teams to advance with one of them being a two seed. Four other people have two teams picked thus far. We should know at least two more teams tonight with the last one possibly being decided tomorrow.