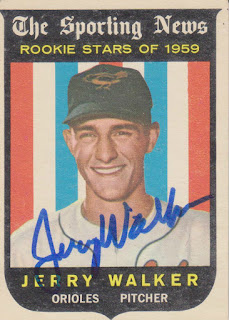 This is not my final card from the '59 set, but it is the last one from the Sporting News Rookies subset. This one features the former Oriole, Athletic, and Indian, Jerry Walker. Like the rest of the '59s, I sent this card to him in 2013 and I got it back two weeks later.

Jerry pitched in the Majors for eight seasons and, like the previous post of Dick Stigman, he bounced back and forth from the rotation to the 'pen his entire career. He finished his career with a 37-44 record with 13 saves and a 4.36 ERA.

Jerry's best season came with the Orioles in 1959. That season, he went 11-10 with 4 saves and a 2.92 ERA while striking out 100 batters. He made the American League All Star team that season and picked up the win in the Mid-Summer Classic.

This is the fifth card from the subset that I posted on here. Three of them featured close-ups like this one and the other two had posed action shots. Personally, I think that the close-ups work a lot better with the striped background.
at 2:32 PM