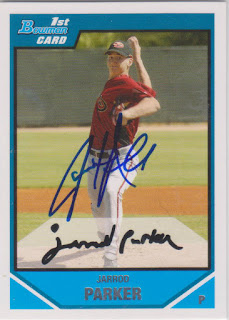 This is a card that I got signed at the Future's game in 2009 while Jarrod was a farmhand for the Diamondbacks. This was the only card I had of him at the time and he signed it prior to the game. That Futures Game in St. Louis was pretty crazy by my 'graphing standards. There were a ton of people there early hoping to get some 'graphs of some up-and-comers. I got there at least a half hour before the gates opened and there had to have been at least forty people in line in front of me at the gate I entered. By the time I got in the park, the closest I could get to the field was the second row, and I still did pretty good from there. I surprisingly did a lot better in St. Louis than I did in Kansas City three years later.

My biggest pet peeve about St. Louis was the ushers. People were packed into the lower seating area by the dugouts hoping to get autographs two hours before gametime. But, if someone actually had tickets in that section, they would make the masses of people move so that two people with tickets that had zero interest in autographs could sit in their seat and eat a hot dog with a throng of people all around them. It was absolutely asinine. They could have waited thirty minutes and had their dog ten rows higher. It would have pissed less people off and the hot dog eaters would have been much more comfortable.

Jarrod has pitched two full seasons with the A's since they acquired him in a trade prior to the 2012 season. In those two seasons, Jarrod won at least 12 games while keeping his ERA under 4 and striking out at least 130 batters. Unfortunately though, he missed all of last season after having his second Tommy John surgery. He was rehabbing in the minors this year to make his comeback, but ended up fracturing a bone in his elbow. That required another surgery and Jarrod is still on the 60 day disabled list. As far as I can tell, there is no timetable for his return at this point.

On the college baseball front, all of the Super Regional teams are known. The Super Regionals are a single two out of three series with the winner advancing to Omaha. For all of the CWS contest entrants, here are the teams you still have that could possibly land you a point for the first phase.